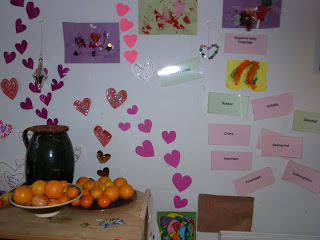 When I try to think back, to earliest memories of making art at home maybe or in school I cannot see anything. Not me, not a room, nor a table, no materials and no-one else there. And yet I did make stuff because some of the things I made still exist. A couple of pictures; one made with felt tips and another with cut out shapes making a fish blowing bubbles are framed and fading on my mum’s bedroom wall. A little clay lady with a high bonnet painted red and green sits on a dusty, dark shelf on the landing of the home I grew up in. Bits of dried clay that have fallen off her basket of flowers sit at her feet. Clay heads made from drawings of my school friend Sarah sit alongside each other under grassy moss leaning against the side of the barn. Almost gone and disintegrating back into the earth.

Thinking about who was around the art making in the past, encouraging and responding to it and how that changes through life as the context in which we make work changes too. Maybe an art teacher inspires us because they themselves are an interesting or flamboyant character and represent something which is attractive to our emerging selves? This is certainly not true for me and anyone else with whom I did art at Thomas Mills High School back in the day…for all will surely agree that Mr S was neither interesting nor inspiring or even had any energy to enthuse us with. You could not have found a duller art teacher – the light was out in his being. Poor him… maybe he had stuff going on or perhaps our class was so annoying to teach (and we were) that we didn’t get the best from him. I don’t think so though! His voice was monotone and he used it to go on and on and on for most of the lesson about what we were about to do leaving us falling off our stools, pulling at our ears and begging for mercy with 10 minutes left before break time to make any artwork. I have a poor memory so maybe I am getting this wrong but he did actually wear a greyish brown science labcoat at all times right? Say no more.

I did not get enthused at school by my art teacher and I did not want to emulate his strangely stifled ways but I was ‘good’ at art and the positive reactions to my drawings and painting made me feel nice so I carried on and did some more. I remember mixing powder paint, stirring with such vigour or the powder would never actually dissolve into the water. The spiky, dried out old brushes scratching the flaky powder paint across sugar paper which sucked in any moisture. This was called painting.

I got lots of encouragement from home (two parents… both went to art school!). But sometimes while I was getting praise at school, from my mum at home I would often get a raised eyebrow and a pursed lip as if to say “is that it?” My mum and dad were and are both very creative, inspiring people who have had a massive impact on my art making (I wouldn’t tell them that directly though and they wont be reading this so I can say that without sounding like a creep!). Probably the most significant affect was to put me right off it! And my choice at 18 years of age to not go to art school but apply instead to University to do Social Anthropology which was a subject I had never even heard of. Such was my desire to do something that neither of my parents knew anything about and could therefore not have any view or opinion on, I put away childish things and made my bid for freedom and independence.

Nearly 15 years and many life drawing classes later I put a portfolio together for an interview at Brighton and got onto a 2 year part time Art Foundation course. Those early weeks on the foundation were hell and I literally had to hold onto my chair to stop myself from running out as the pressures of trying to express visually or make something or even say something ‘creative’ invoked such fear that I felt my brain dissolve and terror grip my throat. I found it quite challenging.

Having invested for nearly 20 years in careful, considered, rational, written communication there was hardly any capacity for creativity or making an instinctive visual response. At times I have felt physically unable to make any mark at all on any surface. And yet, here I am now in a realm where I am expected to be making art work ongoingly, exploring my evolving artist /therapist identity and responding to new ideas and learning. In June this year, us first year MA Art Psychotherapists together with our second and third year colleagues will put together an end of year exhibition alongside Fine Art BA and MA students(!). We are going to show the world our art work and say something to the public about our artist selves and the emerging therapist within! But as a friend of mine recently told me, “it’s not exactly a ball breaker is it Saskia?”. So, with that in mind I am going to stop writing this and go and wash down a piece of glass from the garden, roll out some ink and make some work while counting my lucky stars that this is not a compulsive, driven, neurotic activity nor is it, as my friend would remind me, demanding, arduous or punishing; no one’s balls are being broken.