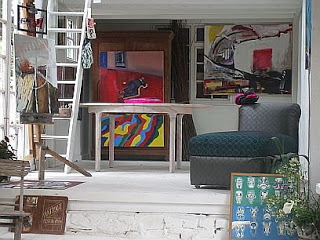 It has been a while – but with Jo Whiley on Women’s Hour distracting me in the background and the Babs down for a sleep, I have coffee and maybe a free hour – and it is time to make another installment.

We are week two of our Open Studio in Suffolk. Mum and I spoke well before Xmas about registering her rather dilapidated old barn as part of Suffolk Open Studio taking place over weekends in June and the possibilities of being inspired by having a project, a deadline and by doing something together as a family with brothers, cousins, girlfriends and friends – and whoever else wants to get involved. So, at Xmas I raised it – are we going to go for it or not? No-one was particularly interested and everyone felt they were too busy to get very excited about this project. In the end, on the day of the deadline in February mum and I wrote a bit of blurb to describe us and what we do and emailed it back and forth to everyone to check in the hope of drumming up their interest and commitment. The name we agreed on was Leyline Studio…

Leyline Open Studio, Saxtead
Painting, Drawing, Illustration, Photography, Textiles, Urban Art, Antique restoration
This group of artists come together at Leyline Studio in Saxtead to motivate and support each other. They are occupied in creating their own individual work in various places and come home to draw inspiration from the places they grew up in. The house and workshop provide space for making interesting and dynamic work ranging from drawing, painting and illustration to urban art, photography, textiles and furniture artworks.

This blurb, I sent off to Suffolk Open Studio’s person in charge with a cheque for 100 pounds. Now it is true to say I was rather chuffed with getting this together so it came as a real shock when a couple of months later when we, alongside all other participating artists are preparing work to take to a Showcase Exhibition in Rougham to discover that I have somehow mistakenly registered us as a ‘Gallery’. This has major ramifications that only become apparent over time. It means, first and foremost that we aren’t on the map in the Open Studio Handbook, we aren’t entitled to publicity materials to put up outside the barn to entice people in, and at the Showcase Exhibition that we have to label all the work (by 10 different artists) with one name so it gives the impression that it was all done by one person! And we are not allowed to mention anything about a Leyline Studio.

I have to say I was gutted. The art work from brothers, cousins and friends had been arriving in Suffolk via the postman from London and Bristol. I drove up from Brighton with Babs in the back of the van a day ahead of the Showcase Exhibition to sort out the work and frame it all up. It was great to see a load of interesting packages containing their art work and I spent all day with the Babs running around the barn unpacking, framing, and phoning artists to check titles and prices. I was also getting my work out and making decisions about which of my bits I wanted to show. It was a buzz getting it all done. The next day I drove the van to Rougham to meet mum after she finished work in Ipswich. All was going to plan. We carefully carried our artwork into the Rougham Barn to find our allocated space. We spent two and a half hours hanging and re-hanging the work – knocking nails into oak beams which just bounced back at us and trying to hang frames at the same level on completely uneven walls. Babs was brilliant and sat quietly watching people or eating crackers and hummus. It felt uncomfortable there, like people were talking about us. Am I paranoid?

That night I had dreams about all the works falling off their insecure nails and smashing their cheap Ikea frames and glass on the concrete floor. I had horrors of being called by the person in charge to come and clear it all up. When I did then get a voice message from the very same person my blood ran cold. He said politely that we had not labeled and priced all the work, and that even though he had asked us not to we had left Leyline Studio flyers around the place. I decided to deal with it and phoned straight back. He said that without all the work labeled, we would not be eligible for the competition that was being judged at 3p.m. later that day. I said that I didn’t think that we would have been included in the competition anyway – ‘for obvious reasons’! Surely to goodness it was clear to anyone that one artist did not do all that work; textile, graffiti, oil painting, monoprint, wire drawing, illustration and so on. I said I could get there later before the exhibition was opened to the public at 6p.m. and sort out the labels.

We arrived on mass, me mum, the Babs and three other women – one of whom works at the Royal Academy. I was telling them the story thus far and that even though 4 of our group had exhibited the week before at the Crimes of Passion exhibition in Bristol at the RA West of England and that one of our group was a well know local painter – they were all now called; ‘D.Neary’. It is true to say that the work in our corner was different. Two illustrations screen printed onto skateboards by one of my brothers was priced high to ensure they didn’t get sold. They looked great. But, it was a bit of a mishmash and difficult to tell whether our work was strong or not because of the context. The woman from the RA advised me that I had underpriced one of my bothers prints so when no-one was looking I added a new card!

That was then and this is now. Week two of our open studio weekend and with a huge graffitied Open Studio sign out on the road, several wooden boards at strategic cross roads a mile away, and flyering to Southwold and back again we are hopeful. We might even get a visit from Sarah Lucas who lives nearby and is bound to be driving pass at some point. Surely? The work looks really good and if one of my brothers is done helping Banksy put together his new exhibition at Bristol Museum maybe he’ll have time to drive up with some more of his work. And if my cousin’s exhibition at the Rarekind Gallery in Bethnal Green finishes this Friday and he hasn’t sold everything hopefully he’ll send the rest up to Leyline Studio.